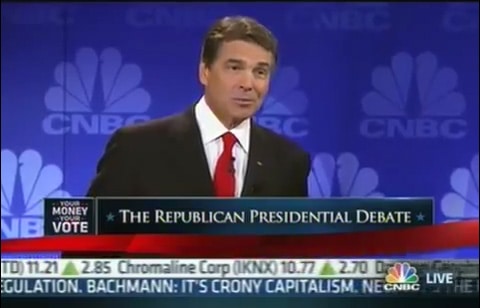 In case you missed Rick Perry's epic "oops" gaffe at last night's debate, check it out, AFTER THE JUMP…

His campaign is now fundraising off of it:

We’ve all had human moments. President Obama is still trying to find all 57 states. Ronald Reagan got lost somewhere on the Pacific Highway in an answer to a debate question. Gerald Ford ate a tamale without removing the husk. And tonight Rick Perry forgot the third agency he wants to eliminate. Just goes to show there are too damn many federal agencies.

The governor said it best afterwards: “I’m glad I had my boots on, because I sure stepped in it tonight.”

While the media froths over this all too human moment, we thought we would take this opportunity to ask your help in doing something much more constructive: write us to let us know what federal agency you would most like to forget.

Is it the EPA and its job-killing zealots? The NLRB and its czar-like dictates? The edu-crats at the Department of Education who aim to control your local curriculum?

Send your answer to forgetmenot@rickperry.org, and if you are on twitter join us in using a new twitter hashtag: #forgetmenot. And, if you could, throw in a $5 contribution for every agency you would like to forget. We hope you have a long list. And we promise we will write down every last idea. So we don’t forget.

Still standing in our Boots,

He's also appearing on every morning show in an effort to save himself.