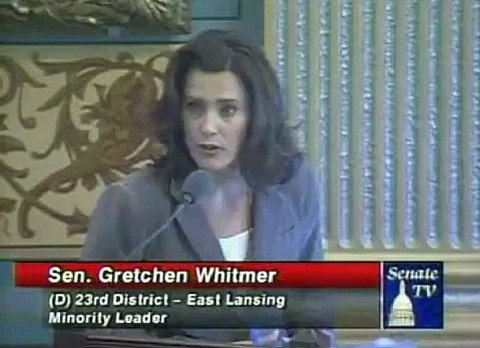 Michigan State Senator Gretchen Whitmer yesterday ripped Senate GOP a new one over passage of a "bullying" bill that was gutted so heavily that it actually creates, as Whitmer notes in her speech, "a blueprint for bullying."

Watch Whitmer's speech, AFTER THE JUMP…

Says Whitmer: "You may be able to pat yourselves on the back today and say that you did something, but in actuality, you're explicitly outlining how to get away with bullying. Your exceptions have swallowed the rule. As passed today, bullying kids is okay if a student, parent, teacher, or school employee can come up with a religious or moral reason for doing it."

"Matt's Safe School Law" passed 26-11 with all Democrats voting against it. The bill is named for Matt Eppling, an East Lansing 14-year-old who committed suicide after being bullied by classmates in 2002. The law includes a section noting it doesn't abridge First Amendment free speech rights or prohibit expression of religious or moral viewpoints — a provision Democrats fear could be used to justify harassment of gay, lesbian or transgender students. Democrats tried unsuccessfully to attach an amendment to list characteristics — such as race, gender and sexual preference — that are off-limits for bullying. They said policies that include detailed lists have held up better when challenged before the U.S. Supreme Court."

Whitmer takes aim at the disgusting moves by Republicans:

"Here today you claim to be protecting kids, and you're actually putting them in more danger. There are at least 10 Michigan children in the past decade whose deaths are directly attributable to bullying…Had this bill that you're going to pass today been law in effect while they were alive, how many of their deaths would have been prevented? ZERO!"

"So this might solve a political problemn that Republicans have. but be clear. You are papering over the problem that is a reality faced by hundreds of kids in Michigan schools every day. In fact not only does this not protect kids who are bullied. It further endangers them by legitimizing excuses for tormenting a student. And the saddest and sickest irony of this whole thing is that it's called 'Matt's Safe School Law'. And after the way that you've gutted it, it wouldn't have done a damn thing to save Matt!"

"This is worse than doing nothing! It's a Republican license to bully."

Watch Whitmer's speech, AFTER THE JUMP…