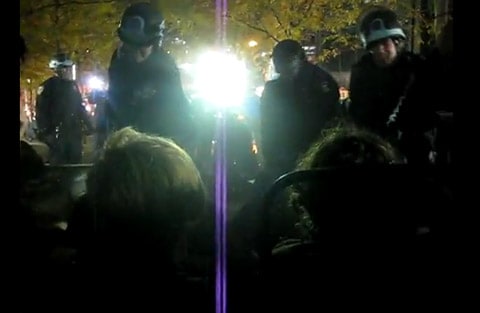 In an early morning raid, hundreds of police officers swept into Zuccotti Park and began dismantling the tent camp set up there for weeks and arresting protesters in the 'Occupy Wall Street' movement, the NYT reports:

The protesters, about 200 of whom have been staying in the park overnight, initially resisted with chants of “Whose park? Our park!” as officers began moving in and tearing down tents. The protesters rallied around an area known as the kitchen, near the middle of the park and began building barricades with tables and pieces of scrap wood.

Over the next two hours, dozens of protesters left the park, while a core group of about 100 dug in around the food area. Many locked arms and defied police orders to leave. By 3 a.m., dozens of helmet-clad officers, watched over by Police Commissioner Raymond W. Kelly, closed in on the remaining protesters. They pulled them out one protester at a time and handcuffed them. Most were walked out without incident.

(Below, Zuccotti Park as of 4 am, courtesy @JoshHarkinson) 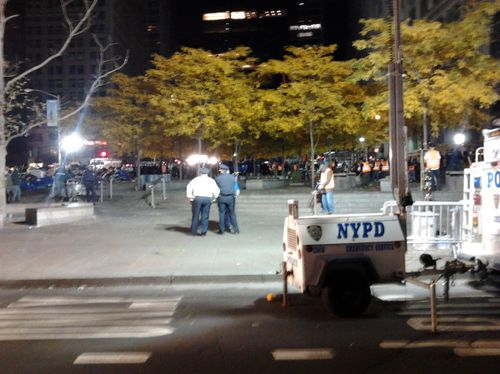 The police prepare to conduct the raid: