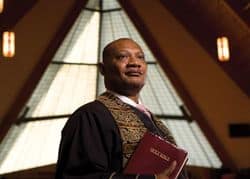 An interesting survey of the state of New Jersey's black churches vis a vis LGBT rights appeared today in The Star/Ledger. Apparently, black churches want it known: LGBTs are welcome. Even in "leadership positions." Kind of.

A random sampling of black ministers in the Newark area found many are aware of lesbians, gays, bisexuals and transgendered men and women in their congregations, singing in the choir or working in a church office. And they are willing to welcome them with open arms. The Rev. Ronald Slaughter of St. James AME in Newark estimates 60 to 70 percent of all churches have homosexuals in their congregations. “They (the congregations) may not know it, but they can’t be judge or jury at the door,” he said.

The Star-Ledge reports a "generational divide" among black churchgoers around Newark, similar to that in religious communities around the country, which finds younger congregants more accepting of LGBT rights than their elders. Surprisingly, many members of the clergy seem to welcome the shift:

The Rev. M. William Howard of Bethany Baptist in Newark said he speaks against homophobia from the pulpit, but “my ministry is not defined by advocacy of gay people.” He doesn’t believe the church should be called upon to overtly endorse or criticize topics such as gay marriage. “Church — not just the black church — is still wrestling with how it addresses sexuality.”

Jackson believes black churches are moving toward more tolerance. “I think anyone who is gay or lesbian or whatever should be welcome in all of our churches. That shouldn’t be a question.” He added that most major black denominations are probably opposed to gay marriage, but they wouldn’t eject church members who are in civil unions. “I don’t see the church’s stand on gay marriage changing in my lifetime,” he said.

Even those ministers who forthrightly condemn marriage equality want LGBTs in the pews, which makes good business sense:

The Rev. Jethro James of Paradise Baptist in Newark is adamant in his disapproval of gay marriage. “Marriage is between a man and a woman, and that can’t be legislated,” he said. James, who is also president of the Newark North Jersey Committee of Black Churchmen, said that for gay advocates to insist on changing the church is to persecute the church for its beliefs. James said there are several gay people and one transgendered person in his congregation. “They come to worship. And ask forgiveness. Sinners welcome. Come join us.”