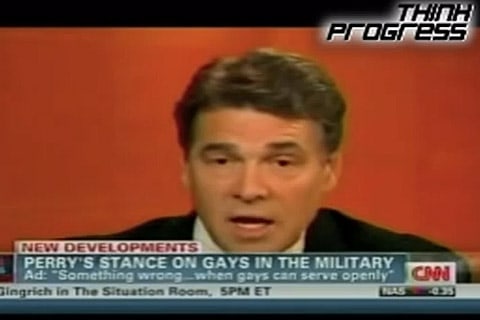 Perry couldn't explain what Obama's "war on religion" is with any logic.

He also defended discrimination against gays, saying that Catholic Charities and the Boy Scouts should be able to do so. He also said he doesn't care if NATO allies accept gays in the military, or that the  Joint Chiefs have said that repeal of 'DADT' has gone without a hitch and gays are serving openly without issue.

He would still reinstate 'DADT':

"I think Don’t Ask, Don’t Tell worked fine. Listen, I wore the uniform….and this president to use the military, and he’s used the military twice, Wolf and both times, I think to get support from his base. But particularly on the gays in the military issue, he made the decision that he was going to respond to his base by pushing through and pushing through Congress when he had the votes to openly serve as gay members of the military. I didn’t agree with that. We have two wars going on, unit cohesiveness, the problems that that can cause, those are real…I’m just telling you the members of the military I talked to, when this was being talked about, I didn’t talk to anyone who was for it…"