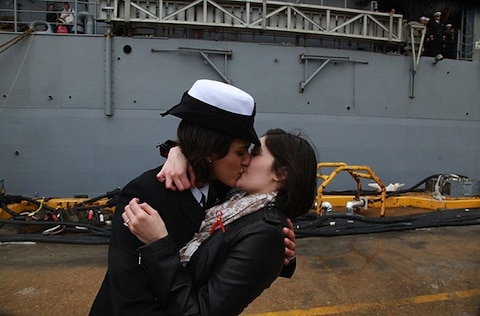 The dock landing ship Oak Hill, deployed for three months in Central America, returned home today. As part of Navy tradition, one person is chosen to be the first off the boat to kiss a loved one.

As the homecoming drew near, the crew and ship’s family readiness group sold $1 raffle tickets for the first kiss. Petty Officer 2nd Class Marissa Gaeta bought 50 – which is actually fewer than many people buy, she said, so she was surprised Monday to find out she'd won.

Her girlfriend of two years, Petty Officer 3rd Class Citlalic Snell, was waiting when she crossed the brow.

They kissed. The crowd cheered. And with that, another vestige of the policy that forced gays to serve in secrecy vanished.

The Virginian-Pilot has also posted an interview with the couple, AFTER THE JUMP…