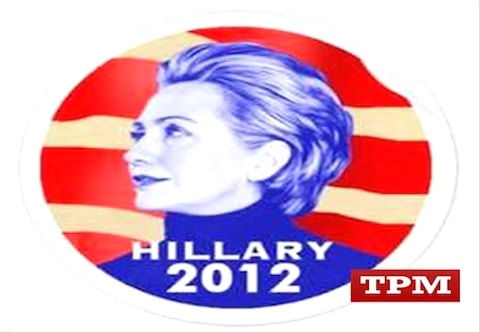 According to Shaun Dakin, an anti-robocall advocate, Run Hillary 2012 has now made calls in New York, North Carolina, Wisconsin, Maryland, Michigan, Pennsylvania, Arizona and Colorado. It appears to be the first formal 2012 campaign function undertaken by an ostensibly pro-Hillary group — not counting the occasional fundraising email from a Clinton ally asking for money to help her retire her 2008 campaign debt.

Due to the fact that these calls are being placed in battleground states (with the exception of New York, Clinton's most recent home), recipients and observers have inferred nefarious motives. Guesses as to who the culprit is fall into one of two categories: dead-end Clinton backers or Republicans hoping to stir up some trouble.

TPM notes: "For her part, Clinton has denied again and again any interest in running against President Obama next year. She has said suggested she’ll leave her current post as Secretary of State when Obama’s first term ends."