The National Journal reports that Bachmann, who has scheduled a press conference for 11am ET this morning, is out of the race: 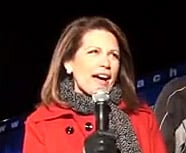 Rep. Michele Bachmann is suspending her presidential campaign, said a senior Republican official with direct knowledge of the lawmaker’s plans. The official, who spoke on condition of anonymity, said the Minnesota lawmaker, a favorite of the tea party wing of the party and a harsh critic of President Obama, realized after her sixth-place finish in Iowa’s caucuses that “there was no viable way forward.” By suspending her campaign, Bachmann is effectively dropping out.