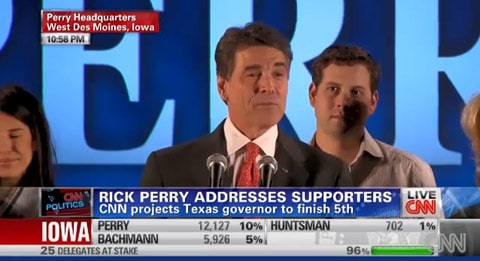 Rick Perry announced last night that he is heading back to Texas to "assess" the results of the Iowa caucus and "determine whether there is a path forward" for him in the race.

Mr. Perry’s campaign became so feeble at the end that it is easy to forget why many observers, myself included, once thought him to be quite formidable. Mr. Perry was the only candidate other than Mr. Romney to rack up a significant number of endorsements, a key measure of party support. He was the only candidate other than Mr. Romney to raise enough money to run a full 50-state campaign from the start. He had better public-sector credentials than Mr. Romney — the sitting three-term governor of a large state rather than the former one-term governor of a medium-sized state — and his signature accomplishment in office was a strong job-creation record rather than shepherding the passage of a health care bill that is substantively similar to President Obama’s. He had no misgivings about confronting Mr. Romney — something candidates from Tim Pawlenty to Michele Bachmann were strangely reluctant to do. He had a speaking style that seemed to be more in line with the mood of the Republican base. Mr. Perry had a lot going for him, but his campaign appears to be at an end.