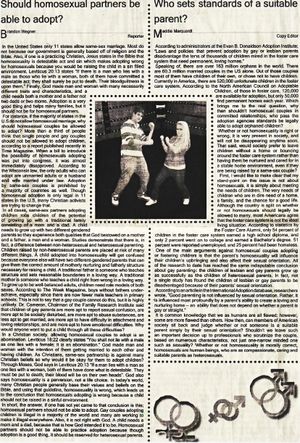 Pro-and-con editorial pages have a long if not particularly storied history in student newspapers, though they're not quite an exercise in journalism. They're actually kissing cousins of the forensics club. One student is directed to pen an article arguing for the existence of anthropogenic global warning or for the benefits of cow-cloning, another is told to argue the contra. Minds are sharpened, debating skills are honed, and nobody much reads the things anyway.

It's a fine tradition — until, apparently, an editorial calls for the death of a classmate's parents.

In a pro-and-con editorial package in a recent edition of Shawano High School's Hawk's Post, in Shawano County, Wisconsin, students debated the merits of gay adoptions. According to The Green Bay Press Gazette, the "con" writer contributed these words:

… if one is a practicing Christian, Jesus states in the Bible that homosexuality is (a) detestable act and sin which makes adopting wrong for homosexuals because you would be raising the child in a sin-filled environment. Leviticus 20:13 states "If there is a man who lies with a male as those who lie with a woan, both of them have committed a detestable act; they shall surely be put to death. Their bloodguiltness is upon them."

The author went on to cite Leviticus three more times. (You can read the whole screed via a PDF downloadable at the Gazette.)

The article wound up in the hands of a 13-year-old in the Shawano school system named Tanner, who's being raised by his dad, Nick Uttecht, and Uttecht's partner, Michael McNeilly. Tanner showed his dads the story. They were not pleased.

Uttecht, who has three other children in the Shawano school system, contacted school administrators and obtained a swift apology from the district superintendent, Todd Carlson, who promised to review the paper's editorial procedures. "Offensive articles cultivating a negative environment of disrespect are not appropriate or condoned by the Shawano School District," Carlson said.

The Gazette story has attracted more than a few unfriendly comments, which has led young Tanner to enter the discussion. He's a smart kid. In the face of really shocking condescension — such as that issuing from the keyboard of a Ms. Judy Hurta, who wrote:

Good thinking Tanner. But you are a rare child. An understanding boy. But the rest of us don't see homo people as being normal and take offense to the realization that they are amongst us. Sodomy is an sex act that is not love but sex. Your dad loves you but so did that coach at Penn state love the boys he violated. To normal heterosexuals it is an abomination that you children are allowed to be raised in a home of love and sexual preferences that regular people don't indulge in. Where are the mothers in this picture? How did the dad's get the children and not the mothers? I am sorry to feel as I do but I do think sodomy is wrong and parents should be a man AND a woman.

I understand that this article can get a lot of hate. My father and my mother had told me that when we decided to send it in as a story. I cannot belive that my school newspaper would post such a story, saying gay people can't raise kids, it just makes me laugh. There is nothing wrong with me,even though one of my parents is gay, i am not emotionally disturbed, nor do i underachive. My parents teach me real values, to love everyone as they are.

Previous Post: « Saudi Man Arrested For Arranging Dates With Other Men
Next Post: WATCH: Focus On The Family’s Appeal To NFL Fans »