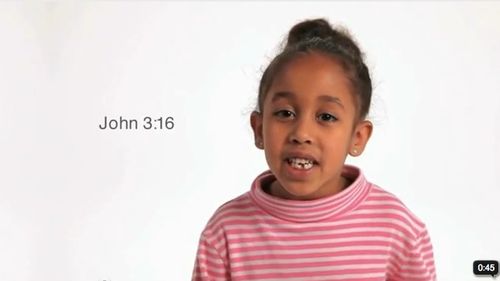 During yesterday's Broncos-Patriots NFL match, Focus On The Family ran a treacly ad in which a parade of children said:

John 3:16: For God so loved the world — the whole world — everyone — anyone! — that's a lot of people! — that He gave His one and only son — His only son — that whoever believs in Him will not perish, but have life eternal. Life! Wow!

Presumably, the notable hate group chose to build its ad around John 3:16 because that's the favorite verse of Broncos quarterback and SuperChristian Tim Tebow, who famously used to write "John 3:16" in the antiglare greasepaint beneath his eyes. The PR value of the citation is questionable in light of yesterday's game, in which The Lord God Almighty — with whom Tim Tebow likes to credit his team's victories — abandoned the Broncos entirely. Verily, the Patriots did whip them like dogs.

Regardless, there's a petition going around at Change.org politely requesting that CBS cease airing ads by hate groups like Focus On The Family. And you can watch a detourned version of the Focus ad designed by Adam Mordecai AFTER THE JUMP …