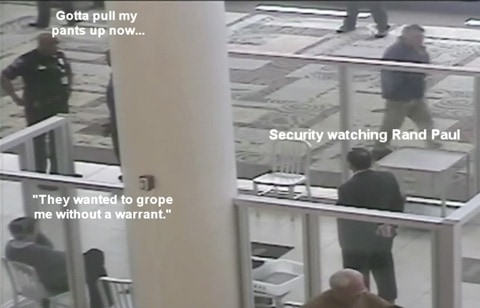 A video has been released of Senator Rand Paul, who (along with his father Ron) made a big stink earlier this week about being "detained" by the TSA after refusing a pat-down in the Nashville airport.

The clip, this one with fictional dialogue and annotations, reinforces the fact that Paul was just being a drama queen about his signature issue.

In response to Monday’s incident, his father’s presidential campaign issued a statement slamming the Transportation Security Administration and promising to abolish it if elected.

“The police state in this country is growing out of control,” Ron Paul’s campaign said. “One of the ultimate embodiments of this is the TSA that gropes and grabs our children, our seniors and our loved ones and neighbors with disabilities. The TSA does all of this while doing nothing to keep us safe.”