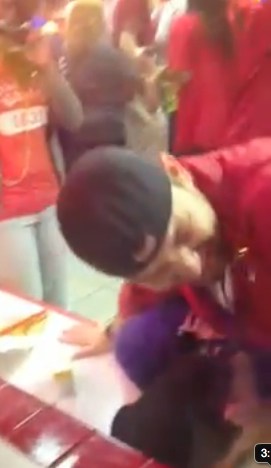 Direct from the Deep South, the Real America, where people respect the individual and old-fashioned gentility reigns: WATCH, AFTER THE JUMP, as what appears to be a University of Alabama student sexually assaults a young man who’s passed out from (I assume) alcohol poisoning at a sporting event, while a dozen or more fellow students cheer him on. (NSFW)

And hey, University of Alabama, if you’re reading: Do you recognize this kid? Are you going to speak with him? Because in the era of cell phone cameras, too many incidents like this one could really damage your sterling reputation.

UPDATE: Never mind. This wasn’t a sporting event at all — apparently, despite all the Alabamian regalia, this occured in a Krystal fast food joint on Bourbon Street in New Orleans during last night’s game. And the perp’s not a student. He’s an actual grown male who seems proud of his behavior, and who has taken to bragging about it on Twitter. There’s a rumor about that the victim has since died, but I haven’t seen any evidence to suggest that’s the case.

UPDATE: The clip has been taken down. Deadspin has a copy posted.