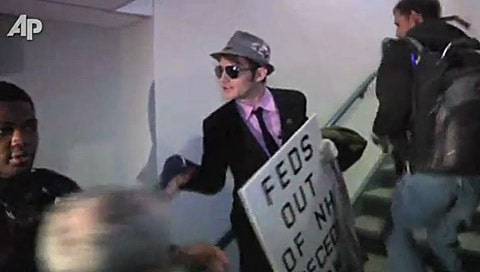 Rick Santorum had a disastrous campaign stop in Manchester, NH today where a group of hecklers continually interrupted his appearance and speech there. The WaPo reports that the group appeared to be "a combination of gay rights activists, Ron Paul supporters and Occupy Wall Street protesters."

He was interrupted periodically by heckles, particularly one man who shouted every few minutes. “What about equality for the gays?” he yelled at one point and, after Santorum opened with a request for respect, “How much respect for you have for gay people, Rick!”

“Shut up!” Santorum supporters shouted back periodically, one man muttering, “glad he’s not my boyfriend” of the most vocal protester.

Hecklers continued to dog him at a stop in Keene, as can be seen on an AP video. As Santorum left the scene one man can be heard yelling, "Hey Santorum, have you Googled yourself?"

More on the Keene heckling from CBS News:

"I have a question and it's about gay people," asked the first man to be called on at a Santorum town hall meeting here today. "They are children of God too. Do they have the right to marriage? Do they have the right to serve in the military? Should they be treated like any other citizen? Under your presidency, would you protect their rights or would you diminish them?"

Santorum answered that he doesn't believe marriage or serving in the military are inalienable rights, but "privileges," adding, "It's not discrimination not to grant privileges."

A few people jeered him.