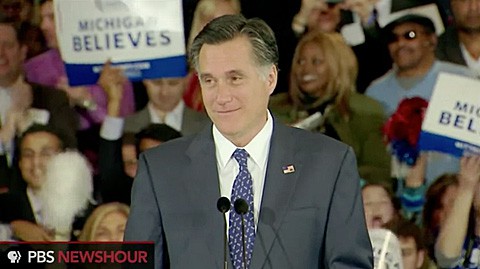 As you probably know by now, Mitt Romney took Michigan and Arizona in yesterday's GOP primary – Arizona with 47.3% of the vote and Michigan by a much smaller margin 41.1% to Santorum's 37.9%.

Said Romney of Michigan: "We didn't win by a lot, but we won by enough, and that's all that counts."

Michigan awards its 30 delegates by Congressional district, which meant Mr. Santorum would either leave Michigan with nearly the same number as Mr. Romney or only slightly fewer. Mr. Santorum beamed when he took the stage before a cheering crowd in Grand Rapids and reminded his supporters of how far he had come.

“A month ago they didn’t know who we are,” Mr. Santorum said, moments after calling Mr. Romney to concede. “They do now.”

As the Republican presidential nominating fight enters its third month, the race remains far from deciding the nominee who will challenge President Obama. A dozen primaries and caucuses will take place over the next week, dominated by Super Tuesday, when more than 400 delegates will be at stake.

Watch the Romney and Santorum speeches and a new DNC clip, AFTER THE JUMP… 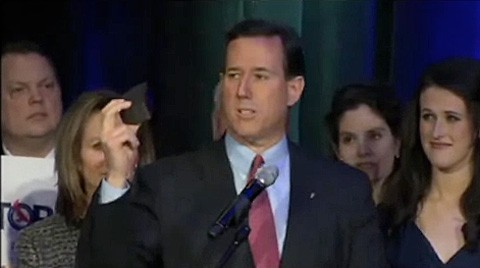 The DNC is out with a new Mitt Romney 'Out of Touch' spot.