Jonathan Baker, the Director of the ironically named 'Corporate Fairness Project' at the National Organization for Marriage, stood up today at the Starbucks shareholders meeting and asked if the company's statement in support of same-sex marriage (that it is "core to who we are as a company") came from the top down, Good as You reports. 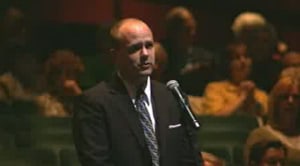 Starbucks chairman and CEO Howard Shultz then got a big round of applause from shareholders when he answered Baker:

"I would assure you that the senior team at Starbucks discussed it, and it was, to be candid with you, not a difficult decision for us."

Following the meeting, NOM announced a boycott of the company, and an accompanying website, Dump Starbucks.

"Unlike our opponents, we do not target whole companies for the actions of an individual business executive in that company," said Brian Brown, NOM's president. "But Starbucks has taken a corporate position in support of redefining marriage for all of society. We will not tolerate an international company attempting to force its misguided values on citizens. The majority of Americans and virtually every consumer in some countries in which Starbucks operates believe that marriage is between one man and one woman. They will not be pleased to learn that their money is being used to advance gay marriage in society."

Listen to Baker's question and takedown, AFTER THE JUMP…