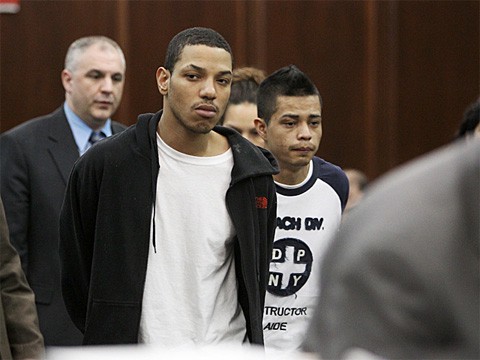 Edwin Faulkner, 30, and Juan Carlos Martinez-Herrera, 30, the two men who robbed and killed Chelsea man John Laubach and then fled to Orlando, Florida where they were apprehended last week, appeared in Manhattan Criminal Court on Sunday,

They were each charged for second-degree murder, DNA Info reports:

On Feb. 20, just days before the murder, Faulkner, an ex-con who served three years in prison for grand larceny, allegedly said that he and Martinez-Herrera, who has a prior robbery arrest, were having sex with Laubach for money and "that they were going back to rob him of more valuables when the time was right."…

…According to court papers, Faulkner admitted to choking Laubach, who was often spotted with his beloved cockatoo Bolo, at his West 22nd Street apartment. Realizing that he was dead, they allegedly bound the victim's hands and feet using electrical cord and tape around 9 a.m.

They also wrapped duct tape "tightly around his head and mouth," according to the court documents.
At that point, the suspects allegedly swiped Laubach's jewelry and laptop and ransacked the apartment.

Martinez-Herrera’s fingerprints were on a knife found in Laubach’s apartment and he also tried to use the victim’s ATM card, prosecutors allege. Investigators also recovered phone records linking Faulkner to the victim.