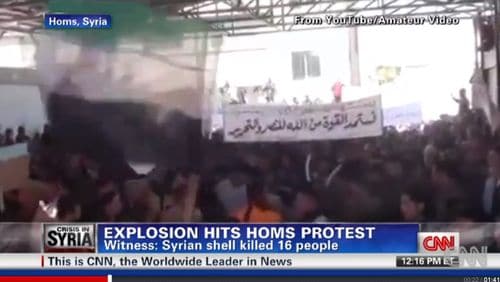 The situation worsens in Homs.

Here's a video of government explosives detonating in the middle of a peaceful crowd.

… Reuters: Red Cross can't get through … "A major assault on Homs took place yesterday … We continue to received grisly reports of summary executions, arbitrary detentions and torture." … "They are torturing them and killing (detainees) one by one. They are executing them in batches."

From The Advocate: Homophobes to gather at Oxford …

Christian Concern … opposed antidiscrimination laws and is currently fighting efforts to legalize same-sex marriage, and a related organization, the Christian Legal Centre, is helping a psychotherapist appeal her conviction of malpractice by offering an undercover journalist a “cure” for homosexuality. The U.S.-based Alliance Defense Fund, a right-wing legal group, is also involved with the conference.

… Gay students, and many Christians, will be deeply offended to see extremist groups given a platform at Exeter College,” Sam Dick, policy director for the gay rights group Stonewall, told the Oxford Student, a campus newspaper.

Even if Santorum wins Ohio, he can't win Ohio's delegates:

Santorum … has already forsaken nine delegates by not being on ballots in three Ohio congressional districts.

… Santorum failed to file a full complement of delegates in six additional districts, said central committee member Bob Bennett. The holes add up to another nine delegates, for a total of 18 out of the 63 up for grabs. Santorum also did not file all 18 of his at-large delegates.

… but, says Joe Nocera, Santorum is excellent for the Republican Party, and we should all root for him:

An alcoholic doesn’t stop drinking until he hits bottom. The Republican Party won’t change until it hits bottom.

American Conservative: Why we can't have a Christian republic.

It's no crime to break an unjust law: The deportation of a valedictorian. 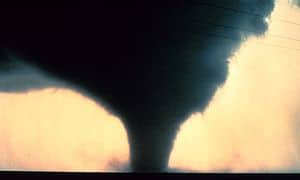 How many people can fit in Manhattan?

Authors Kergan Edwards-Stout and Gregory G. Allen have an enlightening chat about AIDS, literature, and the quirks'n'perks of modern publishing.

WATCH: The disgustingly cute spectacle of a one-year-old who can play drums. AFTER THE JUMP …