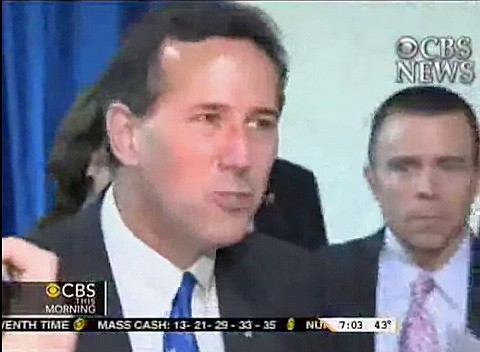 Santorum is fundraising off the exchange:

"Earlier today, while campaigning in Wisconsin, I criticized Romney and Obama for their outrageous healthcare legislation. Predictably, I was aggressively attacked by a New York Times reporter all too ready to defend the two of them, and all too ready to distort my words," Santorum wrote in an email to supporters. "Let me assure you, I didn't back down, and I didn't let him bully me. I think it is high time that conservatives find the courage to expose the liberal press for what they are, a defender and enabler of Romney's and Obama's liberal agendas."

DailyKos is mystified that the Romney campaign is drawing attention to it:

First, purely on a political level, why take the media's side? Second, why draw attention to an incident highlighting one of Romney's biggest weaknesses, his epic (to borrow a phrase) flip-flop on health care reform? And finally, given that Mitt Romney's campaign says Rick Santorum has already lost … why are they still trying to beat him?