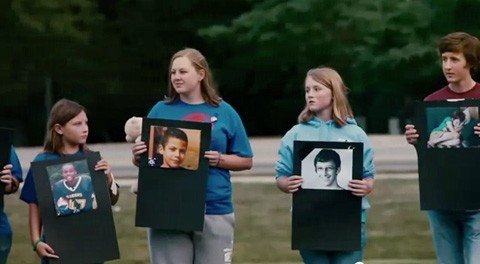 The Weinstein Company will release the film Bully unrated on March 30 after the MPAA refused to budge on its 'R' rating on the film, according to a press release received by Movieline:

Furthering proof that the R rating for some language is inappropriate for a film that’s meant to educate and help parents, teachers, school officials and children with what’s become an epidemic in schools around the country, the fight against the rating continues on. The outpour of support by politicians, schools, parents, celebrities and activists for the film’s mission to be seen by those it was made for – children – has been overwhelming. Nearly half a million people have signed Michigan high school student and former bullying victim Katy Butler’s petition on Change.org to urge the MPAA to lower the rating.

Said BULLY Director Lee Hirsch, “The small amount of language in the film that’s responsible for the R rating is there because it’s real. It’s what the children who are victims of bullying face on most days. All of our supporters see that, and we’re grateful for the support we’ve received across the board. I know the kids will come, so it’s up to the theaters to let them in.”

It will be up to movie theaters to decide whether or not to let minors see it.

I've reposted the Bully trailer, AFTER THE JUMP…