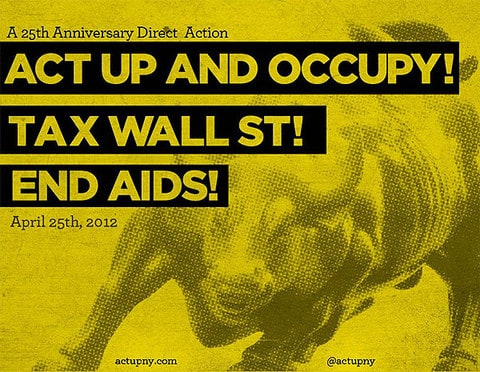 Celebrating its 25th year of rabble-rousing, ACT UP announced today that on April 25th they and their allies will take to the streets to raise awareness for HIV/AIDS issues as well as to lend a hand to the ongoing Occupy Wall Street movement.

From their press release, via Joe.My.God:

To commemorate its 25th anniversary, the AIDS activist group ACT UP will return to its roots and stage a massive demonstration and march on Wall Street — on Wednesday, April 25 — starting at 11 am at City Hall and ending on Wall Street. Hundreds of protestors are expected to converge for a daylong siege in Lower Manhattan.

ACT UP (The AIDS Coalition to Unleash Power) will be joined by Occupy Wall Street (OWS), the organization making history this year and last with its public encampments and series of protests against the global financial community. The groups are joining forces to pump up the volume on a growing nationwide outcry for a “Financial Speculation Tax” (Fi.S.T.) on Wall Street.

The groups are calling on local, state, and federal legislators to “give Wall Street the FiST,” which is needed to fill AIDS funding gaps and — once and for all — provide universal healthcare in the US. It’s time for effective healthcare to be made available to everyone — to the 99%, not just the 1%.

Watch a video about so-called Robin Hood taxes and how they could help fight HIV/AIDS, AFTER THE JUMP…