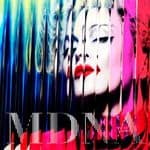 After a promising start, topping the Billboard 200 chart in its first week with 359,000 copies sold, Madonna's MDNA suffered an 88% drop in sales to 46,000, which sets the record for biggest second week drop in history. Many are questioning whether the option for fans to purchase the album as part of a tour ticket package skewed the initial numbers reported by Billboard Magazine. With 185,000 copies sold as part of this deal, only 179,000 can constitute individual album sales. Had these been the final numbers reported, the album wouldn't have topped the US charts in its first week after all.

A new behind-the-scenes clip on Madonna's 'Truth or Dare' fragrance commercial, AFTER THE JUMP…