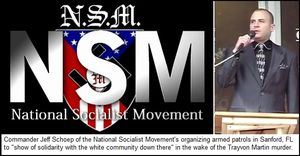 Late yesterday, Brandon made note of the National Socialist Movement, one of the largest and most prominent neo-Nazi groups in the United States according to the SPLC, which is patrolling Sanford, Florida in the wake of the Trayvon Martin killing,  to protect "white citizens in the area who are concerned for their safety."

Watch WOFL's report, AFTER THE JUMP…

More on the group's background from Pam Spaulding HERE.