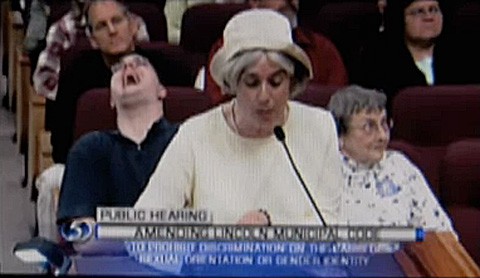 Check out this testimony from Jane Skrovota at this week's hearings regarding a proposed LGBT non-discrimination ordinance in Lincoln, Nebraska. And BETTER YET, watch the reaction of the guy behind her.

Some of the reasons this woman objects to LGBT people receiving protection from employment and housing discrimination:

"P- E- N- I- S goes into the anus to rupture intestines. The more a man does this the more he'll be a fatality or a homicider…"

"A huge percent of gay men in school grounds molest boys, partly because they don't have AIDS yet…"

"Roman senators went to Roman baths to be promiscuous gays, bis, and orgiers then went to the Coliseum to watch Christians get mauled and perish. Do gays become this sadistic? Yes. They cuss after coupling, don't like the land they lay on, and 80% of those that did treason by the year 2000 are gays."

"Gays can transform to be celibate to live to be 80 years old."

"A wedding dress is for a woman not a man."

"Jesus was kissed by Judas, a homo, who tried to sabotage Jesus' kind ideas. Do you choose Jesus, a celibate, or Judas, a homo? You have to choose!"