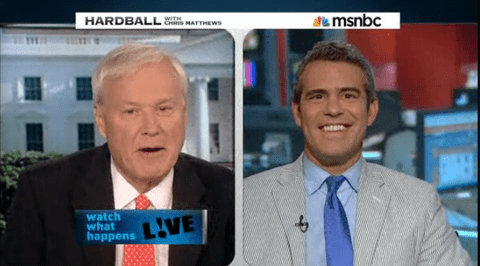 Then, toward the end of their interview, Matthews asked Cohen why a gay man would ever join the Log Cabin Republicans.

It's something I've never understood. I was executive producer of a documentary years ago called Gay Republicans. I'm interested in why someone would support a party that doesn't necessarily support equality for that person. And I can only assume it's about the wallet. It's about 'I'm a fiscal Republican'.

But for me — and it's funny. I'm not political on my show at all, but gay issues are something that not only are of a great concern to me, but just as a human being, I feel so obviously passionate about being treated equally to everyone else that it is the one thing that I really speak up about on my show.
…
So, I can't — I can't understand, Chris, the idea of saying, 'Oh well, they're going to put more money in my bank account. Who cares if they don't believe I can get married?' I don't get it.