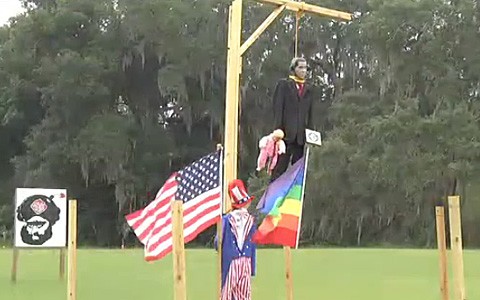 Quran-burning pastor Terry Jones has placed an effigy of President Obama outside his church, the Dove World Outreach Center. Obama hangs by a noose and holds a Gay Pride flag in one hand and a doll in the other. Nearby are an American flag and an Uncle Sam figure.

The words “Obama is Killing America” are written on a trailer nearby.

Jones did an interview with the HuffPost in which he explained the symbolism:

Jones said the flag was meant to call attention to Obama's stance on same-sex marriage and that the baby doll is there because the president is "favorable toward abortion."

Jones also said that radical Islam is "the most dangerous threat to life and national security in America."

He told a local news station: "It's very clearly not a death threat. It is to represent that he is to…let's say…die politically, if you want to put it like that.

Watch TV20's report, AFTER THE JUMP…