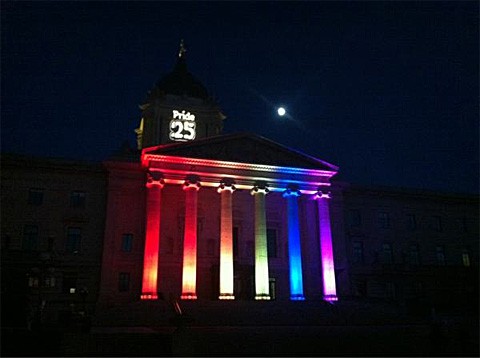 The Manitoba legislature is joining in Winnipeg Pride celebrations:

“This is one of the most significant things we are doing to celebrate the occasion of our 25th anniversary,” said Barb Burkowski, Chair, Pride Winnipeg. “What really started the Pride movement in Winnipeg was the passing of a piece of legislation that included protection against discrimination based on sexual orientation in Manitoba’s Human Rights Code – so what better way to symbolically mark the occasion than by lighting up the building where these protections were drafted and became law.”

Previous Post: « The OXD Mirror: New Music for 6.01.12
Next Post: ‘One Million Moms’ Deletes Facebook Warning That Green Lantern is Gay After Being Swamped by Pro-Gay Comments »