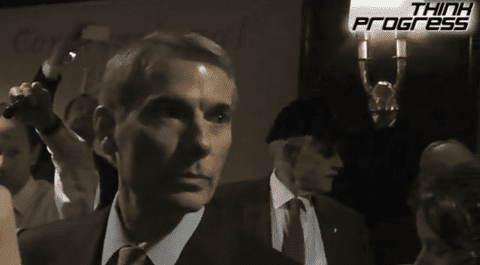 Ohio Senator Rob Portman’s name has long been at the top of potential GOP vice-presidential picks, and the Senator seems to be getting a dry run when he joins Mitt Romney’s upcoming bus tour through Ohio.

Before that, though, Portman today attended the Faith and Freedom Conference currently underway in Washington D.C. And it’s there that the team from Think Progress asked Portman what he thinks about an Employment Non-Discrimination Act. His main concern? That people who are discriminated against will sue and that employers who want to discriminate will be uncomfortable.

Here’s the transcript of Portman and journalist Scott Keyes’ exchange:

KEYES: The Senate’s going to be taking up the Employee Non-Discrimination Act. Do you think that it ought to be illegal to fire someone for being gay in the United States?

PORTMAN: I don’t believe in discrimination…

KEYES: But whether or not it should be legal.

PORTMAN: What I’m concerned about in Paycheck Fairness and other legislation like that is the fact that it will spawn a lot of litigation the way the legislation is written. So you don’t want it to be a boon to lawyers, you want it to actually help people. But no one should discriminate.

KEYES: So you’re worried that people might actually take up claims that they were discriminated against?

PORTMAN: […] A lot of them would create a lot of legal rights of action that would make it more difficult for employers to feel comfortable, to be able to hire, and to keep this economy moving. So you have to be careful how you do it.

Watch video AFTER THE JUMP.

Previous Post: « New Booklet Hopes To Bridge Divide Between Gay Mormons And Their Families
Next Post: Abercrombie and Fitch’s Male Models Do ‘Call Me Maybe’: VIDEO »