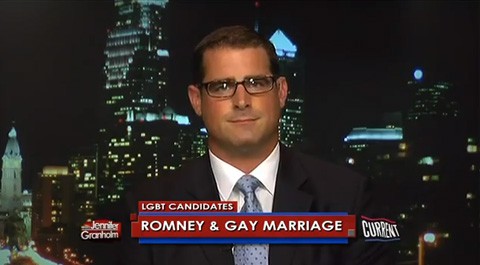 Gay Pennsylvania House of Representatives candidate Brian Sims talks to Current's John Fugelsang about coming out while an All-American college football player, DADT repeal, homophobia in the Democratic Party, and about the Republican and Romney positions on same-sex marriage:

"My guess is that behind closed doors, Mitt Romney would tell you that he's had gay friends, gay family, gay co-workers, and we all know that he has. And my guess is that he probably treated them with the utmost respect. But the fact that he in order to receive the nomination of the Republican party feels like he needs to stray so far from what is common sense for most Americans speaks more to the party maybe than it does to Mitt Romney."