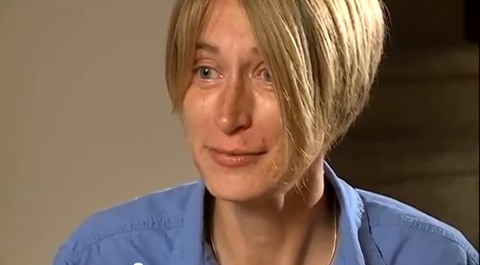 Last Sunday, three men broke into Charlie Rogers' home and attacked her, binding her with zip ties before carving the word "dyke" into her stomach and painting anti-gay phrases on her wall. They then poured gasoline on her floor and attempted to light her house on fire. 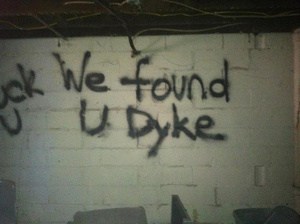 According to a friend, Rogers reportedly "crawled from her house, naked and bleeding and screaming for help before reaching the doorstep" of a neighbor's home.

Now Roger has decided to come forward in an interview with KETV about the incident because people are doubting her story.

Says Rogers, a former basketball player at the University of Nebraska, avid volunteer and small business owner: "My world has been changed forever…For people to think this doesn't happen here, it does. It did."

Rogers says that to have her integrity questioned feels "victimizing again, saddening."

"The idea that people think it's a lie is so hurtful. It's understandable. Intellectually I understand that people have a hard time wrapping their heads around what happened. So do I. But I'm a person, with feelings, with concerns. It's just so…it feels like a punch in the stomach. Like a betrayal, instead of the focus being on safety, healing…I'm not a pawn in a game. I'm a person."

Rogers said she had tried to keep her identity secret after the incident. But she decided to go public Thursday because there have been allegations that the attack did not happen.

"For people to think this doesn't happen here, it does. It did," Rogers told the affiliate.

Rogers' attorney, Megan Mikolajczyk, told CNN Rogers wanted to make it clear it was not "a hoax." Asked if there was anyone specific they were addressing, Mikolajczyk said there was not, but that she wasn't surprised there were naysayers.

"I don't think it's safe or necessary to point the finger at any one individual," Mikolajczyk said. "I think its par for the course for any sort of high profile incident for people to question what happened."

The incident has been classified as a hate crime.