Scientists have built a synthetic jellyfish from silicone and cells from a rat's heart: 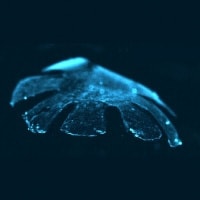 The synthetic creature, dubbed a medusoid, looks like a flower with eight petals. When placed in an electric field, it pulses and swims exactly like its living counterpart.

Parker’s lab works on creating artificial models of human heart tissues for regenerating organs and testing drugs, and the team built the medusoid as a way of understanding the “fundamental laws of muscular pumps”.

The hope is to create something similar from human heart cells to test drugs that would improve cardio functions.

Watch it move, AFTER THE JUMP…