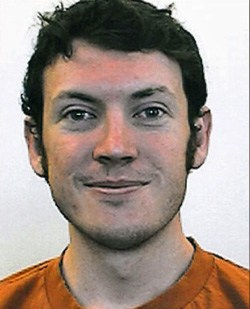 CBS News just released the above photo of James Holmes, responsible for the deaths of at least 12 people this morning in Aurora, Colorado at the Dark Knight Rises screening.

Neighbors say Holmes was a recluse and a medical drop-out who kept to himself:

In an apartment rental application he submitted early last year, Holmes described himself as a "quiet and easy-going" student. Other tenants in his building — which is reserved for students, faculty and staff of the medical campus — described him as a recluse.

A pharmacy student who also lives in the building told The Post he called 911 around 12:30 a.m. because there was a song blaring from the stereo inside apartment 10, where Holmes lived. The student, who wanted to be identified only as Ben, said he couldn't make out the song but that it seemed to be the same one playing on repeat.

He also said Holmes kept to himself and wouldn't acknowledge people when they passed in the hall and said hello.

Previous Post: « U.S. Marines Stationed in Afghanistan Do ‘Call Me Maybe’: VIDEO
Next Post: The OXD Mirror: New Music for 7.20.12 »