The Veterans Committee of UNITE HERE, a union representing 250,000 workers in the hotel, food service and restaurant, textile, industrial laundry, and gaming industries in North America, will deliver 5,000 signed petitions to the Commandant of the Marine Corps in Washington D.C., as well as to Marine Corps recruiting stations in Boston, Chicago, Los Angeles, Miami, Phoenix, San Diego and Washington, D.C. on Thursday, asking for the Marine Corps to cut all ties with Ultimate Fighting Championship (UFC), the group says in a press release. 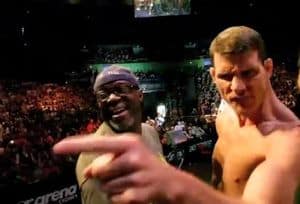 The veteran activists also will voice their support for a bipartisan amendment to the Department of Defense Appropriations Act (H.R. 5856) that would ban military spending on professional sports. The proposed ban – the “UFC Amendment” — would prohibit the use of taxpayer money to sponsor the UFC and other pro sports organizations. The Marine Corps has spent more than $2 million sponsoring the UFC, the nation’s largest promoter of cage fighting events. The UFC is an organization that has tolerated people associated with it making jokes about rape, homophobic slurs and sexually explicit remarks that are demeaning towards women.

Taxpayer money should not be used to support homophobia, misogyny and hate speech, in any form. Through its sponsorship of the UFC, the Marine Corps has trivialized service to our country by juxtaposing images of Marines fighting for our country with the spectacle of cage fighting.

The group has also released a video compilation of hate speech in the UFC.

Previous Post: « Just When You Thought It Was Safe to Go Back in the Water: VIDEO
Next Post: Maryland Certifies Petition Placing Marriage Equality Repeal on Ballot »