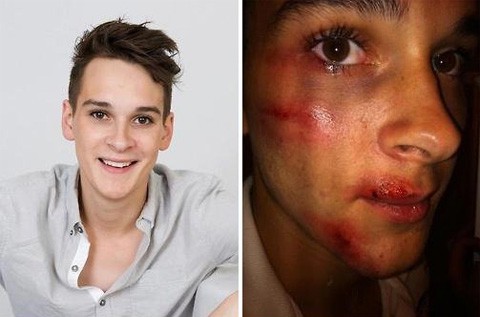 An update on the anti-gay assault that was reported to have happened over the weekend in Missoula, Montana.

Joseph Baken, of Billings, had reported to police that he was beaten by three men after spending the evening at the Missoula Club and asking for the location of a gay bar. Now police say they have new information they are following up on and believe that the incident was fabricated.

…the Missoula Independent and MPD obtained video footage that shows Baken doing a backflip on Higgins Avenue and sustaining the injuries, lacerations to his face, that have been depicted on social media sites, during the landing.

Baken will likely be charged for making a false report, according to police. Baken's alleged story spread quickly on the web yesterday after the Wipeout Homophobia Facebook page posted his photo.

Watch the video footage, AFTER THE JUMP…

UPDATED. "Joseph Baken pleaded guilty this afternoon in Missoula Municipal Court to charges of filing a false police report. He was sentenced to 180 days in jail and a $300 fine. The jail time was suspended."