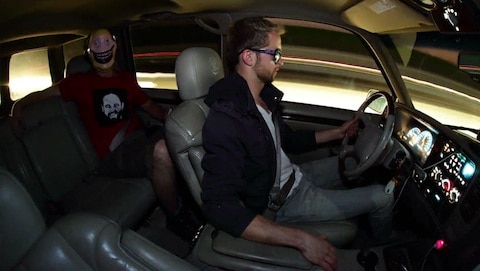 A static screenshot fails to do justice to this time-lapse masterpiece of a music video, which was created by Marc Donahue and Sean Michael Williams and took around 6-8 hours of work for 3-4 seconds of footage.

This lyrical narrative reflects on the perception of time within dreams and waking life. Filmed on location in 2 states over the course of 6 months, we explored our new production technique of what we call 'lyric-lapsing', to achieve the surrealistic feeling of movement…Our goal was to pioneer a new film genre by telling a story through art and music. Part 2 was made to transport the viewer from their own reality into a world of dreams and at the end, they awake to wonder how we were able to take them there. Each scene was born from the symbolic meaning of the lyrics and overall message of the film; Time is the illusion within the dream of life.

Watch it on Vimeo for a crisper version here.