Hugh Hefner speaks out about the importance of defeating the conservative battle to deny gay people civil rights, in the new issue of Playboy, Politico reports. 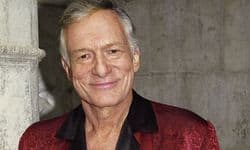 Says Hefner in the issue:

“The fight for gay marriage is, in reality, a fight for all of our rights. Without it, we will turn back the sexual revolution and return to an earlier, puritanical time. Today, in every instance of sexual rights falling under attack, you’ll find legislation forced into place by people who practice discrimination disguised as religious freedom. Their goal is to dehumanize everyone’s sexuality and reduce us to using sex for the sole purpose of perpetuating our species. To that end, they will criminalize your entire sex life…This is a religious nation, but it is also a secular one. … No one should have to subjugate their religious freedom, and no one should have their personal freedoms infringed. This is America and we must protect the rights of all Americans.”