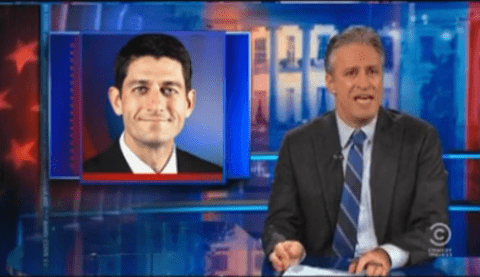 The Daily Show host Jon Stewart had some fun both swooning over GOP veep nominee Paul Ryan's deep blue eyes and absolutely eviscerating him for the many, many falsehoods he included in his RNC speech this week, like the claim that Obama is "gutting" Medicare when Paul Ryan's budget plan takes the same exact steps.

Watch Stewart do his thing as only Stewart knows how AFTER THE JUMP.

I'll try to find one long video, but in the meantime here are three different clips on the same subject: