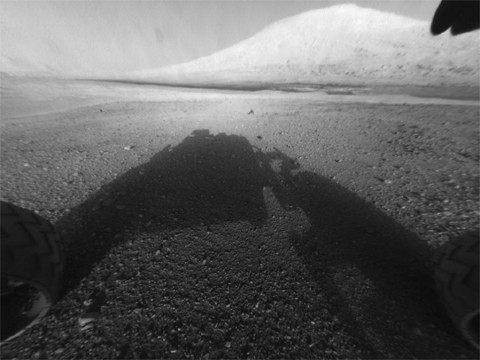 New images and video have been presented by NASA from today's historic landing on the Martian surface by the car-sized rover Curiosity.

One new image shows the rover's wheels and shadow with Mt. Sharp in the background. The mountain is Curiosity's main scientific destination and is three miles high and four miles away. The rover will eventually be analyzing its geology.

The other fascinating piece of media released today is a low-res video consisting of 297 images shot by the probe as it landed which show the heat shield falling away and then a cloud of dust kicked up as jets fired to cushion its blow on the planet.