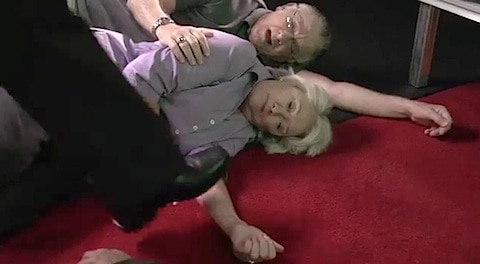 A new ad from MoveOn.org airing during the RNC shows Mitt Romney and Paul Ryan look-alikes (literally) stepping on members of the middle class  – senior citizens, children, and firefighters – who are lying on the convention floor:

"The ad is aimed at conveying to voters how Romney and Ryan would raid the middle class to transfer wealth to the top 1%," the group wrote in a release about the ad buy. "The Romney-Ryan budget would hike middle class taxes to pay for more tax cuts for the rich and would end Medicare and replace it with a voucher program."