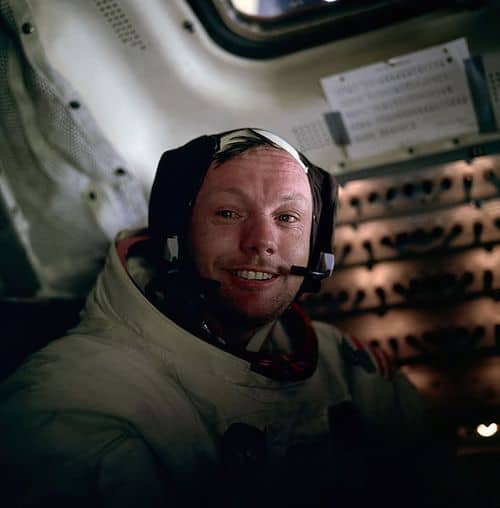 The great mass of people living one thousand years from now will probably be unable to confidently name a 20th century president, prime minister, entrepreneur, or athlete. But they'll almost all know the name of Neil Armstrong.

In 1969, Neil Armstrong was one of several dozen former test-pilots — all smart, all confirmed adrenaline junkies — who'd spent the last decade working for NASA, prepping for a variety of ludicrously dangerous possible missions into space. He commanded the Apollo 11 mission to the moon, and, on July 20th of that year, was the first Earthling to walk on it. What he said when he set foot on that alien world is perhaps the most well-known English language phrase of the last century, even though the technology used to relay the message to Earth might have bungled it. What Armstrong thought he said — or, at least, what he meant to say — was: "One small step for a man; one giant leap for mankind."

After departing from the Apollo's LEM module, Mr. Armstrong and "Buzz" Aldrin went for a three-hour, very moonlit walk.

Upon returning to Earth, Mr. Armstrong stayed there. He taught; he acted as a spokesman for various companies, he kept to himself. From the Washington Post:

“I am, and ever will be, a white socks, pocket protector, nerdy engineer,” he said in February 2000 in one of his rare public appearances. “And I take a substantial amount of pride in the accomplishments of my profession.”

A man who kept away from cameras, Armstrong went public in 2010 with his concerns about President Barack Obama’s space policy that shifted attention away from a return to the moon and emphasized private companies developing spaceships. He testified before Congress and in an email to The Associated Press, Armstrong said he had “substantial reservations,” and along with more than two dozen Apollo-era veterans, he signed a letter calling the plan a “misguided proposal that forces NASA out of human space operations for the foreseeable future.”

No Earthlings have visited the moon since 1972.