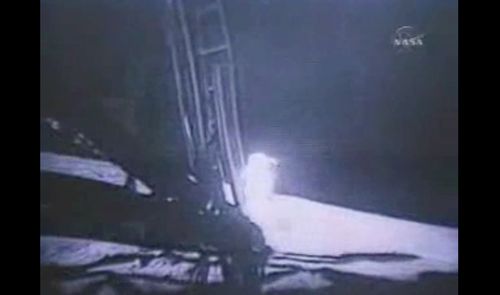 Watch, AFTER THE JUMP, as the eagle gets wings, the eagle lands, and a half-billion souls bear witness to a quiet walk through the Sea of Tranquility:

"The world watched, curious, wondering, aware. Like a sleeper, wakened in the night by a faraway sound. A moment sensed more than understood." 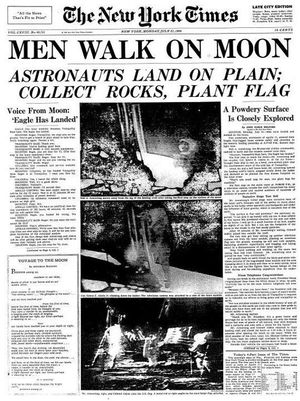 From the Armstrong family:

For those who may ask what they can do to honor Neil, we have a simple request. Honor his example of service, accomplishment and modesty, and the next time you walk outside on a clear night and see the moon smiling down at you, think of Neil Armstrong and give him a wink.

An interview with the fellow who's saving Tesla's lab.

Frank Szabo, a candidate to become the sheriff of Hillsborough County, in New Hampshire, is a man of unshakeable pro-life convictions. Asked Wednesday about using deadly force to prevent a late-term abortion, he said:

"I would respond specifically by saying that if someone is under threat, a full-grown human being, if they're under threat, what should the sheriff do? Everything in their power to prevent them from being harmed," he said.

I would hope that it wouldn't come to that, as with any situation where someone is in danger, but again, specifically talking about elective abortions and late-term abortions, that is an act that needs to be stopped.

The next day, Frank Szabo apologized, and said he never meant it.

"NOM Mocks California Bill To Widen Definition Of Families." Because tradition's more important than making sure kids have parents.

The FBI worries about troublemakers at the RNC.

I can't speak to Governor Romney's motivations. What I can say is, he has signed up for positions, extreme positions, that are very consistent with positions a number of house Republicans have taken. And whether he actually believes in those or not, I have no doubt that he would actually carry forward some of the things that he's talked about.

I don't think he'd back off a five-trillion dollar tax cut at this point. He's made that the centerpiece of his economic argument. I don't think that if Congress presented him with some of the items that are in the Republican platform at this convention — that would, for example, entirely roll back women's control over their reproductive health — that he would stand in the way. He's said that he would eliminate tax credits that are going to wind producers, even though we've doubled the production of wind energy. I suspect he has to follow through on those commitments.

When I look back on 2008,the promises I made — I said I'd end the war in iraq. I did. I said I'd go after Al Qaeda and bin Laden. We did. I said I'd give middle class families a tax cut. They're paying, on average, about thirty-six hundred dollars less than they were when I came into office. I said that I'd make sure that every American family would have some security when it comes to health insurance. We got it done. I said that I'd help young people get more affordable college. And we got that done. So — we haven't gotten everything done that I promised, but a big chunk of what i said I would do, in 2008, we have done. We've got to assume that Governor Romney would do that same thing.

Previous Post: « Neil Armstrong, First Earthling To Walk On the Moon, Dead At 82
Next Post: First Night Of The Republican National Convention Canceled »