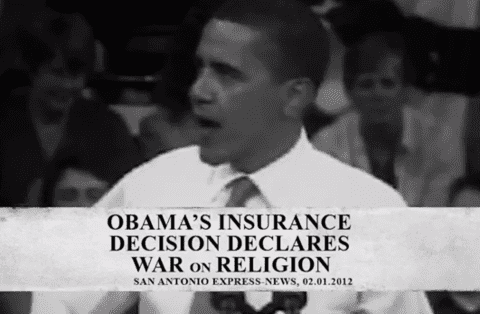 Mitt Romney’s latest campaign ad is doing a lot. Entitled “Be Not Afraid,” the 30-second spot opens with the question “Who shares your values?” before accusing President Obama of using his marquee health care law to “declare war on religion.” Yes, it’s the contraception debate rearing its head again.

Hoping to make absolutely clear where their candidate stands on the matter, Romney’s editing team then take the viewer to Poland, where Romney recently celebrated one of their own, Pope John Paul II.

“In 1979, a son of Poland, Pope John Paul II, spoke words that would bring down an empire: ‘Be not afraid,'” Romney says before the commercial wraps up with an image of the Republican presidential candidate shaking hands with a supporter, legendary Polish labor leader-turned-president and Nobel Peace Prize winner Lech Walesa. It’s worth noting that Walesa, a symbol to many of capitalism triumphing over communism, also backed Ronald Reagan, the beloved GOP president whose distinctive voice Romney seems to be imitating in the video’s obligatory approval message.

Watch it and see if you agree AFTER THE JUMP.