Among the speakers at last night's Republican National Convention opening was failed candidate Rick "frothy mix" Santorum, and a speech notable for its reverence to "hands". Buzzfeed quickly pulled together a compilation (above). 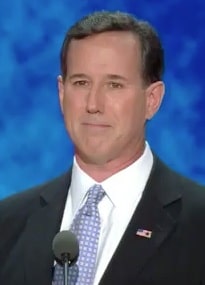 Talking Points Memo noted that social issues were a much smaller part of his speech than they were on the campaign trail, but his disdain for same-sex marriage did make an appearance:

Still, Santorum’s central theory from the primaries — that using the federal government to promote and encourage heterosexual marriage will fix the nation’s woes — made an appearance in primetime, serving as a reminder to viewers that social conservatives still have a lot of pull in the GOP and that the party is firmly opposed to same-sex marriage rights.

“The fact is that marriage is disappearing in places where government dependency is highest,” Santorum said, according to prepared remarks. “Most single mothers do heroic work and an amazing job raising their children, but if America is going to succeed, we must stop the assault on marriage and the family.”

“We understand many Americans don’t succeed because the family that should be there to guide them, and serve as the first rung on the ladder of success, isn’t there or is badly broken,” he said.

But it was his reprise of an inaccurate Romney campaign attack on Obama over welfare that gave Santorum’s speech its hardest edge.

“This summer he showed us once again he believes in government handouts and dependency by waiving the work requirement for welfare,” Santorum said, referring to Obama. “I helped write the welfare reform bill; we made the law crystal-clear: No president can waive the work requirement. But as with his refusal to enforce our immigration laws, President Obama rules like he is above the law.”

In fact, Obama did not waive the work requirement.

NBC's Andrea Mitchell questioned him about it afterward for Rachel Maddow.

Santorum added that "a vote for Mitt Romney and Paul Ryan will put our country back in the hands of leaders who understand what America can and, for the sake of our children, must be to keep the dream alive."

Watch Santorum's full speech and the Mitchell interview, AFTER THE JUMP…