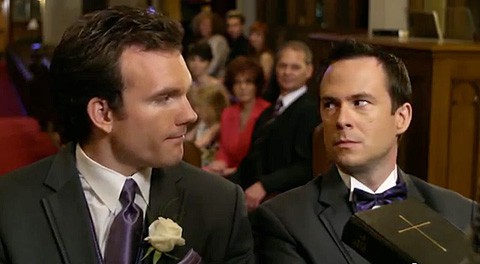 War Poets, a new band featuring five straight veterans of Minnesota’s pop/rock scene, debuted their new video this week for the track "Close Enough", and decided to use the occasion to promote marriage equality. 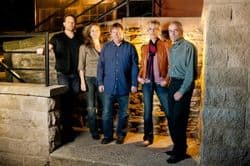 Write the group, in a press release

Directed by Toni Trussoni and produced by Chris Bueckers, the music video for “Close Enough” brings the controversial issue of gay marriage to life. Archival footage and still photographs are sprinkled throughout, showing a pro-gay rally one minute and an anti-gay demonstration the next. The story is set in New York’s Greenwich Village, home of the Stonewall Inn, where the 1969 riots culminated in the first Gay Pride Parade. The video is dedicated to the memory of the Stonewall uprisings. Trussoni’s choices of locations were both idyllic St Paul and upscale Minneapolis, and St John the Evangelist Episcopal Church — a gorgeous building in St Paul, MN, not far from the band’s Minneapolis headquarters — serves as the location where both couples finally get married.

“This is the first time that I have worked on a project with gay couples as the focal point,” Bueckers explains. “It was a challenge. Some people would not work on the project because of the subject matter, and I was a little taken aback by that. The film community is usually very open and progressive about the topic of gay rights.”

Minnesotan voters, of course, are facing a ballot measure this November asking them to decide whether to constitutionally ban same-sex marriage.