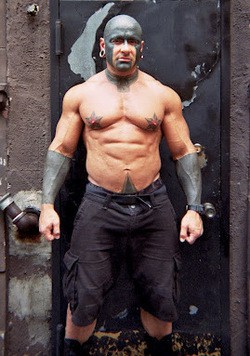 This had many wondering why Dax would involve himself in such an obviously hateful project. The short answer: the film's directors kept the actors in the dark about the movie's actual message. The longer answer, sent in an email to Joe.My.God, is here, unedited:

i can tell you i auditioned for a movie called Desert Storm that was about Ancient Warriors. My character was called Sampson on the paper with a few lines I got each day upon arriving on set. We never saw a full script or any lines after the day we shot them. Many questions were asked regarding absurdity of lines and situations.

Sam the producer who I believed to be, but not certain as Egyptian. His reply would always to work with what we were given as he wrote the script. The clip that I saw part of today for the first time is questionable as to being my voice. The voice over work is dubious at best. a week and a half of work, 75 bucks a day & lunch. ; ) Can't tell you anymore than that other than I'm am very much NOT anti muslim.

one world one love. Tim.

It makes sense that the directors would keep the script to themselves. Wouldn't want anyone spoiling their intentionally incendiary plans!