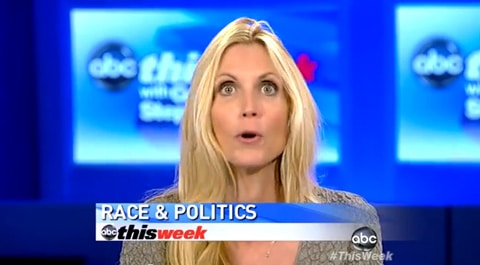 On This Week with George Stephanopoulos, right-wing pundit Ann Coulter responded to a passage in her new book Mugged: Racial Demagoguery from the Seventies to Obama in which she claims that various groups, including gays, have "commandeered the civil rights movement", the HuffPost reports:

Coulter said that she thought that "civil rights are for blacks" because the U.S. has a "legacy of slavery and Jim Crow laws."

She added, "We don't owe the homeless. We don't owe feminists. We don't owe women who are desirous of having abortions, or gays who want to get married to one another." She said that "much of the left…dropped the blacks after five minutes" to argue for "civil rights" for other groups of people.

Stephanopoulos interrupted Coulter asking, "Immigrant rights are not civil rights?" Coulter confirmed that she only thinks "civil rights are for blacks."

She argued, "What have we done to the immigrants? We owe black people something. We have a legacy of slavery. Immigrants haven 't even been in this country."