With regard to my last post about immigration equality, there's a documentary underway about the plight of one gay couple and their battle against discrimination. 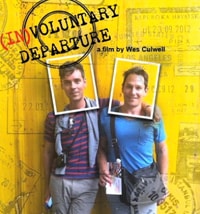 (In)Voluntary Departure is a documentary chronicling the lives of Sandro and Alon, a bi-national couple as they are forced to leave the U.S. and spend a year traveling the globe in search of a new place to call home.

This film follows the year-long journey as Sandro is forced to walk away from his flourishing L.A. based fashion line and Alon must resign from Microsoft, his 10+ year employer, to travel the globe looking for a new home that welcomes and recognizes its LGBT citizens as equal under the law.  This is a chance to be a part of not only telling the story of the outdated immigration policies of the United States, but a chance to join the ever growing voices that are demanding a repeal of the Defense of Marriage Act (DOMA) and the recognition of our friends and legal spouses of bi-national couples.

Culwell is looking for a last bit of funding on indiegogo to finish making the film.

Watch Culwell speak with Sandro and Alon in an interview, AFTER THE JUMP…