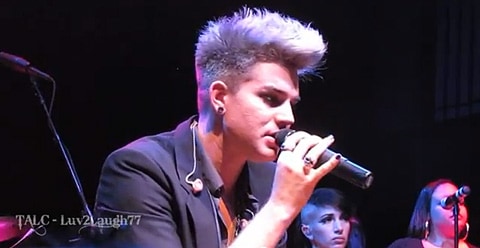 Before launching into a gorgeous rendition of his track "Outlaws of Love", Lambert spoke powerfully to the crowd about the issue: "It has nothing to do with the partisan [politics]. It's a human rights issue."

“We’re continuing to raise every day in every way, but I really want to make it clear here that we have the ability to pass this in Maryland,” he told LGBT reporters and bloggers from across the country during a Marylanders for Marriage Equality conference call. “It is keeping with the character of our state. It will protect rights equally under the law while protecting religious liberty. That’s why our state was founded to begin with, but we do need to raise money here. We do need to raise another couple of million dollars, and if we’re able to do that I believe that we will pass this. And raising those dollars is critically important for our ability to be able to defend this at the ballot.”