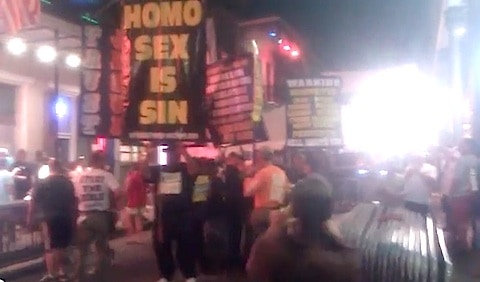 The ordinance prohibits "any person or group of persons to loiter or congregate on Bourbon Street for the purpose of disseminating any social, political or religious message between the hours of sunset and sunrise."

Another man was arrested for attempting to assault an officer.

New Orleans police spokesman Frank Robertson said the men were previously warned not to use bullhorns, but did not comply. Casey Kolosky, a bouncer at Tropical Isle, said the preachers were making slurs against gays and also mentioned Hurricane Katrina victims.