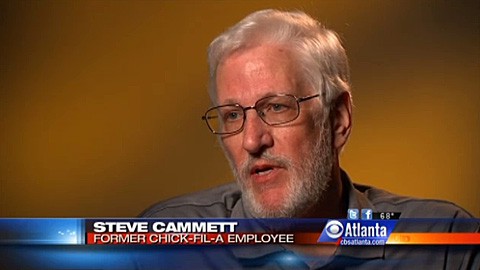 Steve Cammett, a self-described "Chick-fil-A enthusiast" who worked at the company for nine years, tells CBS Atlanta that he recently quit working there over the company's hatred of gay people, and wants to speak out about it:

"I feel like right now Chick-fil-A is a safe place for people to go in and hate, and at the end they expect to get patted on the back for it. And I don't want to work in that kind of environment."

Cammett, whose late sister is a lesbian, says he was disgusted at the message the company broadcast during the highly-publicized 'Chick-fil-A Appreciation Day' and says it is complicit in spreading a message of hate against gay people. Cammett discusses the behavior of customers which disgusted him, and how the company stood by it:

"Putting their arms around that person and saying, 'We sure are glad that your company is taking a stand against those perverts.' And this person is gay. And they didn't know it. And I just thought 'wow, what has happened here?' Chick-fil-A allowed a mindset to continue, especially amongst their customers, that seemed to think that Chick-fil-A didn't like homosexuals."

Video may take a few moments to load in…